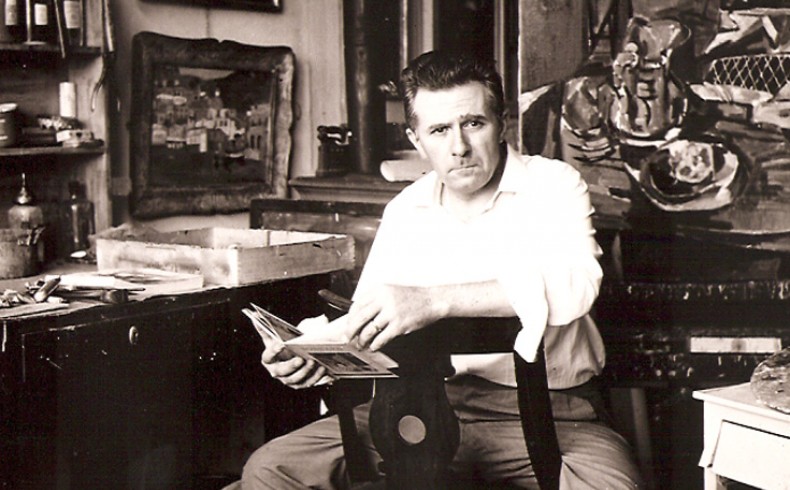 Ettore Fico in his studio, in via Giacomo Medici in Turin, in 1954

Ettore Fico was born in Piatto Biellese on 21 September 1917. After his first studies of painting with maestro Luigi Serralunga, he left to fight in the Second World War; from 1943 to 1946 he was a prisoner in Algeria.
During his long career in art he took part in numerous national and international group shows, amongst which: the Rome Quadriennale d’Arte (the VII, VIII, and IX editions); the Cracow international print Biennale, 1966; the Exhibition of Italian Artists, Prague, 1968; and the XXXIX Biennale Nazionale d’Arte Città di Milano, Milan. He died in Turin on 28 December 2004.

Ettore Fico moved from Piatto Biellese, his hometown, to Turin in 1933. Instead of following a career as a contractor, like all his brothers, he immediately devoted himself to painting, also as a result of his meeting with Luigi Serralunga who encouraged him – and convinced his family to let him continue – having intuited his artistic potential. He began to study at the Accademia Albertina and soon became a pupil of this artist; he studied for various years with such other young students as Filippo Sartorio, Mattia Moreni, and Piero Martina.
At the time the protagonists of the Turin art scene were Felice Casorati and the painters of the “Gruppo dei Sei”. This ensured that in the following years the city environment revealed a kind of dualism between the Casorati trend (of German and metaphysical derivation) and that of the Gruppo dei Sei (which was French-oriented).
Despite the young Fico showing close attention to the cultural turmoil of the time, it was only after the Second World War that he had the opportunity to discover the innovations that were arriving from Europe and to take part in them by building himself his own artistic personality.

In 1939 his studies were interrupted by military service which took him to Northern Africa. In 1943, following the Italian defeats, he was made a prisoner and was taken to Algeria. Here, thanks to the sensibility of his commander, he was given permission to paint: numerous portraits of British officials, landscapes, the port of Algiers and its beautiful beaches. He was given special treatment, to the extent of having a studio tent all to himself. For this reason his period of imprisonment was, he said, one of joy in painting, despite the drama of the war.
From a stylistic point of view he was still influenced by the teaching of Serralunga, but with a particular preference for the psychological introspection of his subjects. The end of the war instilled in the artist the wish to recuperate everything he had left unexplored, and this led to a proliferation of new and often antithetical ways of expressing himself. In Turin the art scene developed into two separate directions: Spazzapan’s preference for abstraction and Felice Casorati’s for realism, to mention the two most important artists in Turin at the time.
Having returned to Turin in 1946, he decided not to frequent the studios of these two artists, showing his great spirit of independence. Here began a fortunate period of research and experimentation aimed at fathoming the various potentialities of colour. The juxtaposition of town and country, a theme dear to the Impressionists and Expressionists, entered his work: he painted places where it was not possible to distinguish the boundaries between land and cement, a place where nature and the city melded together to give life to a suburban landscape of great compositional breadth and to a rarefied and meticulous calligraphy of marks.

His participation in the Rome VII Quadriennale d’Arte in 1955 drew the attention of a wider public as a result of stylistic innovations to be seen in his strongly marked paintings with their vivacious expressive colouristic autonomy. By now he had superseded the teaching of Serralunga; his oil paintings were of still-lifes and landscapes with vibrant colours applied in layers with large and sinuous brushstrokes. Ettore Fico’s stylistic revolution was evident in the variations of his chromatic range and in the presence of bright and vivacious colours that created strong contrasts, even with the violent tonalities typical of the Fauves. His exhibition at the Galleria Fogliato in Turin in 1957 confirmed the success of this wholly personal style.
By the end of the 1950s Ettore Fico had already received wide recognition and, now successful artist, he began to come to grips with a new art trend in Europe and the United States: Expressionism. Brushstrokes thick with the creamy material of paint now prevailed over form and colour to dominate the composition without any sign of the anger and anxiety of other painters who were contemporary with him. The harsher themes, such as dried flowers or wild vegetation, without forgetting the San Remo landscapes or the Positano marine views, were harmonic yet vibrant.
Towards the end of the 1960s the fields of colour became broader and the objects regained a form as a result of sharp outlines and the colour contrasts on the flat surfaces. The outlines were schematized, almost geometrically Neo-Cubist, on the cusp between Braque and Gris, and his art was reinvented by his use of new materials and techniques. In particular, in the period from 1965 to 1975 Fico returned to his beloved still-life subjects and interiors. In this instance such everyday objects as jugs and dried flowers took on an enigmatic character, also as a result of his use of violent tones that evoked a sense of expectation. As can be seen in the compositions of the early 1970s, Fico had no intention of competing with the masters of the past but, all the same, he wanted to arrive at new results which balanced reality with abstraction.
His important colouristic output, above all that of the 1980s and 1990s, mainly consisted of those themes that were to become, once again, symbols emblematic of his success: wisteria, gardens, trees, but also objects, his studio, models, and his beloved dog Moretto.
The works from the last days of his life once again testify to his tenacious research and continued desire to experiment; in them a great enthusiasm for compositional freedom affirmed his great love for painting in general and for colour in particular.